Staci Amburgey isn't afraid of slithering serpentines— which works to her advantage since the "snake wrangler" must catch her prey in the dead of night, deep in the tropical forests of Guam.  Visits to the Pacific Island (a US territory) and ensnaring reptiles are a part of Amburgey’s postdoctoral research on the invasive brown tree snake population.

“The snakes have very cryptic behaviors. They sit still during the day and are active at night—and when you go into the forests it’s challenging to spot them. There are a lot of vines and tree limbs, so everything looks like a snake,” she explains. 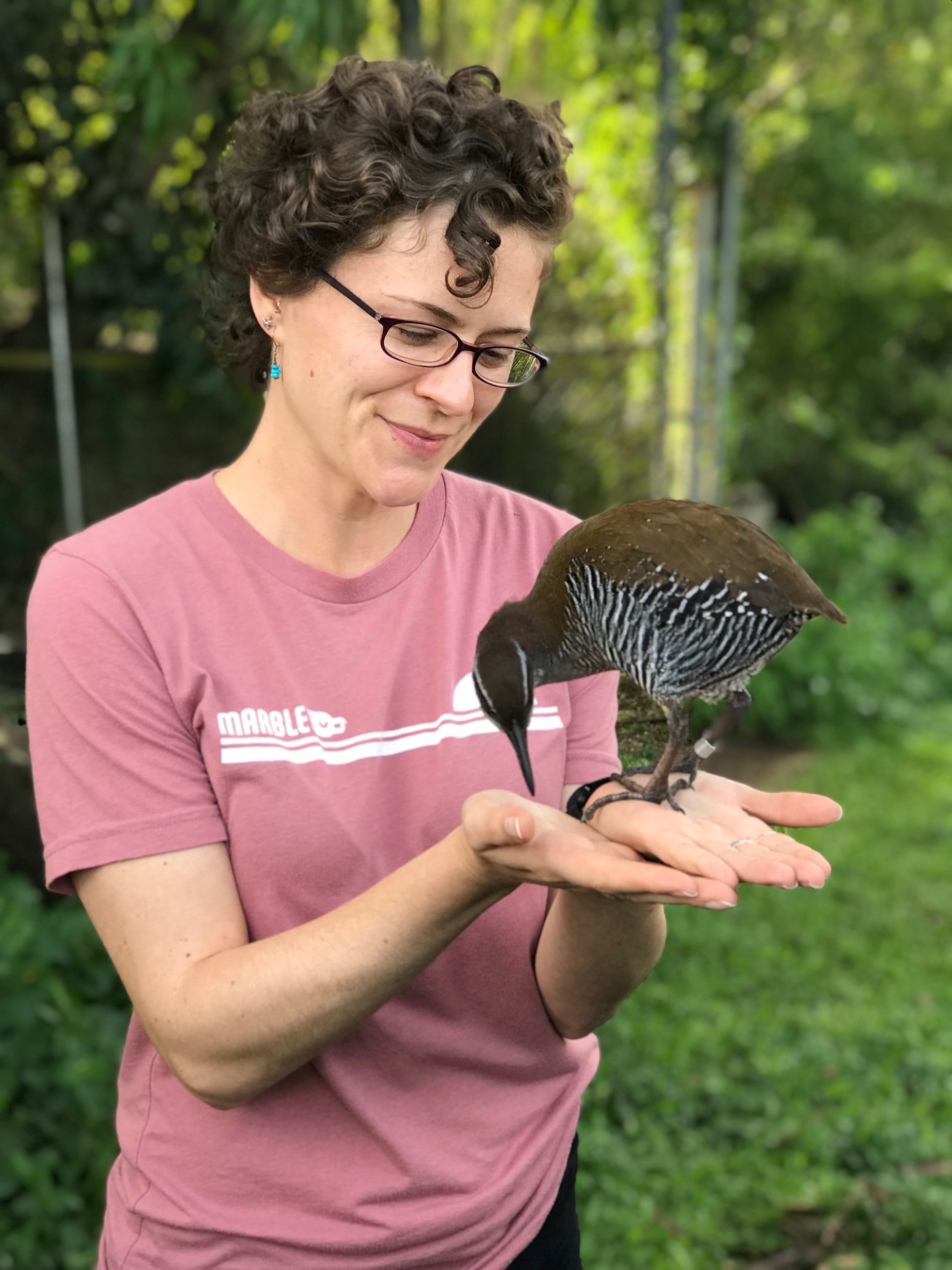 ARCS Alumna Staci Amburgey gently holds a Guam rail bird, also known as a Ko’ko’ bird.
The species was nearly wiped out by the invasion of brown snakes in Guam.
(Courtesy: Staci Amburgey)

According to the ARCS Alumna, the snake was “accidentally introduced” to Guam in the 1940s during World War II. Scientists hypothesized the reptiles may have slithered into cargo that was transported to the island. With no other predators there, the brown tree snake population exploded in a matter of years—devouring smaller animals, such as birds and geckos, and scaring off native Mariana fruit bats.

At one time, scientists estimated there were between one and two million snakes in Guam, Amburgey states.

She says the reptile has reduced or completely eradicated eleven of the thirteen forest bird species that once existed in Guam. “It's so weird to be standing in the middle of a tropical forest, and it's silent. Where are the birds? Why am I not hearing birds? It’s eerie,” she says.

Between the birds and the bats, the brown tree snake has also disrupted the entire pollinator seed disperser ecosystem on the main island, according to Amburgey. “There are plant species that should be growing and regenerating on the island—and we don't see that happening the way that it did in the past.”

When Amburgey is not capturing brown tree snakes on Guam, she is conducting postdoctoral research at University of Washington within the Washington Cooperative Fish and Wildlife Research Unit. A self-titled “population modeler,” Amburgey collects and analyzes data using statistics to better understand how to approach the overpopulation problem on the Pacific Island.

“A big chunk of my time has been trying to produce an effective way to estimate the number of snakes that live in areas targeted for suppression. Then find the best way to reintroduce some of the species that have been eaten by the snakes over the years,” she explains. 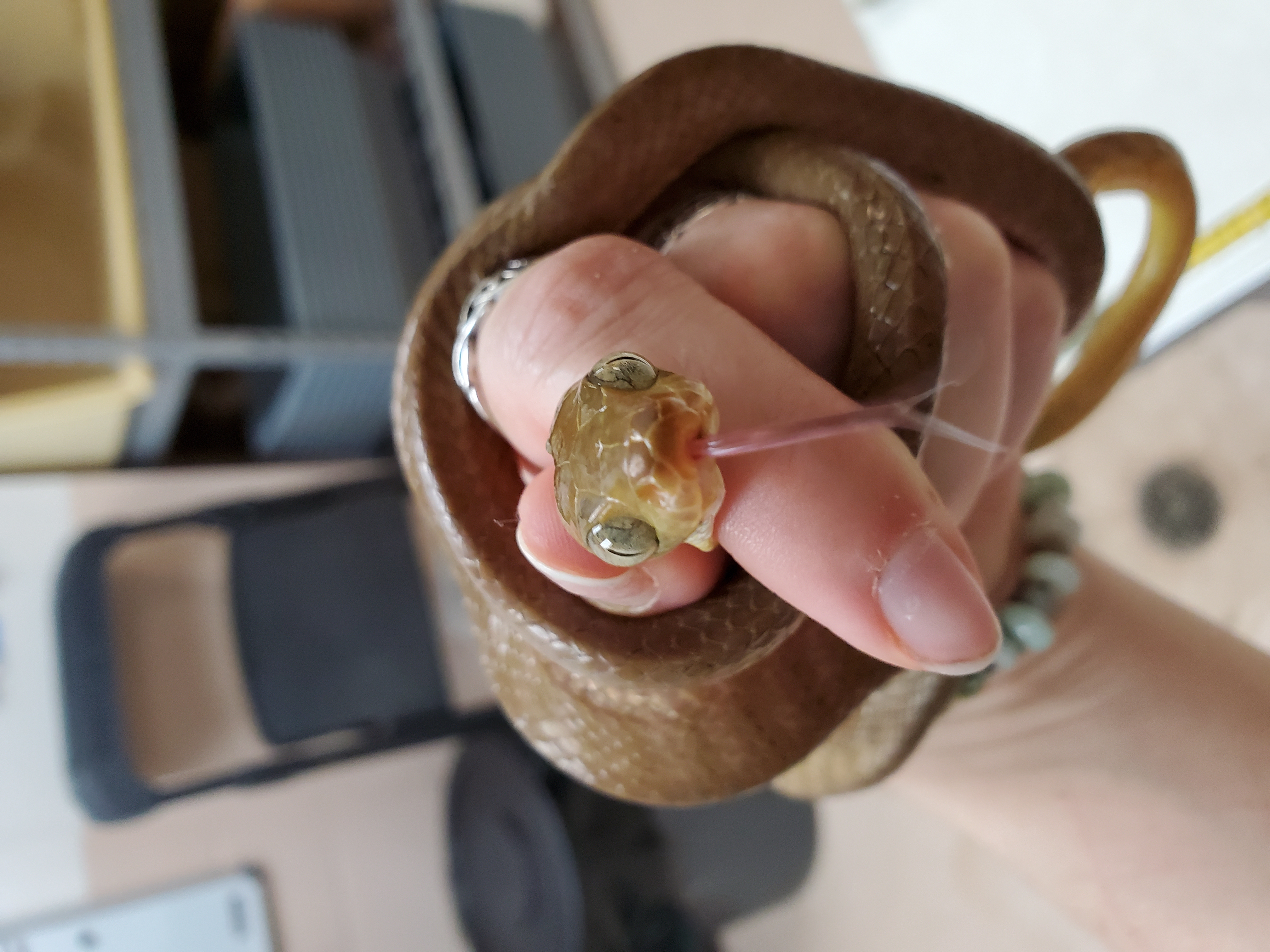 An up-close look at the invasive—and elusive—brown tree snake. The reptile has reduced or completely eradicated
eleven of the thirteen forest bird species that once existed in the Guam tropical forests.
(Courtesy: Staci Amburgey)

In collaboration with the US Geological Survey and the US Department of Agriculture, Amburgey developed “capture-mark-recapture” models to estimate the density of invasive brown tree snakes and to better understand the effects of removal efforts. By testing her theories on Guam and analyzing data sets, Amburgey’s research will determine which method would be most effective in removing the brown tree snake—and be financially feasible. It would also broaden researchers’ knowledge of working on complicated conservation problems, she says.

As an ARCS Scholar award recipient (2015-2017) while a PhD candidate at Penn State University, Amburgey focused on ecology, specifically ecosystem science and management. She says the award offered financial stability and interaction with fellow ARCS Scholars and Members. “We would hold an annual event when our donors came to town. It gave me the chance to meet people who were interested in my work. It was nice to have a supportive community,” she explains.

Amburgey will begin work as a full-time quantitative ecologist with the Washington Department of Fish and Wildlife this summer. She hopes to return to Guam and help reintroduce local species back to the island. “It would be amazing to see the tropical forests return to their former glory, complete with native animals and fauna—just as it should be,” she says. 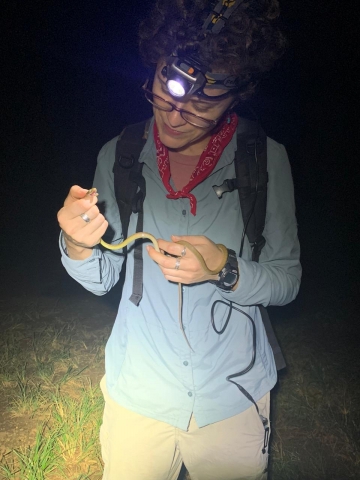