Dr. Kyle Lampe was an ARCS Scholar while pursuing his PhD in chemical engineering at the University of Colorado at Boulder from 2007 to 2009. Now an assistant professor at University of Virginia, he is excited to mentor his first ARCS Scholar, Lauren Russell. Lauren works in Dr. Lampe’s lab and is part of a group that investigates biomaterials for tissue engineering, regenerative medicine, and drug delivery within the central nervous system, developing both synthetic polymers and recombinant engineered proteins. She is funded by ARCS Foundation Metropolitan Washington Chapter.

“While supported by my ARCS Scholar award, I really got my start working with biomaterials and neural tissue,” Lampe said, recalling his days at Colorado. “At that time, I was focused on neural stem cell growth, something I continued as a post-doc, and now pursue in running my own lab where Lauren works as part of a 14-student team. It took some effort to recruit students when I first started the lab – most students would rather get started with research right away and not spend time ordering and setting up equipment.”

That’s another reason mentoring Russell has been such a milestone for him.

“My first PhD student, Lauren, took a chance on me, and she was soon followed by several undergraduates,” Lampe said. “In my own lab, I now mentor four PhD students and ten undergraduates. When I saw the call for ARCS Foundation Scholar nominations, I immediately knew it was something one of my students would fit well. That Lauren was selected is a great honor for both of us. I’m super excited to be mentoring an ARCS Scholar – it is a wonderful full-circle moment for me.” 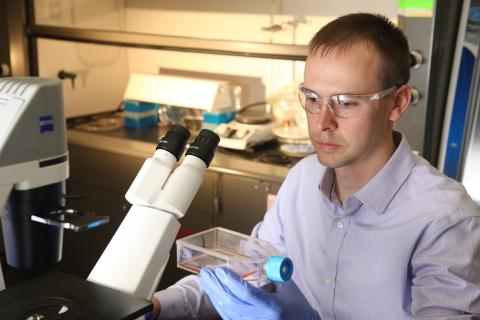