ARCS® Foundation (Achievement Rewards for College Scientists Foundation, Inc.) has released its fiscal year 2016-17 Annual Report: Realizing the Vision of Science in America. The report presents the nationwide public report of investments and outcomes achieved by 16 regional ARCS chapters during the 2016-17 academic year.

Supporting promising young U.S. scientists in the early stage of their research careers, ARCS Foundation Scholar Awards are recognized for their impact in ensuring the strength of the STEM pipeline, which is fundamental to an innovative and growing U.S. economy. Because much of government funding focuses upon science in its developed stage, ARCS Foundation fulfills an essential role in ensuring that young scientists may confidently pursue the basic research that is fundamental to scientific discovery.

The regional, chapter-based model of philanthropic investment practiced by ARCS Foundation since the founding of its ARCS Los Angeles Chapter in 1958 has enabled significant local funding support, allowing members to interact with top-ranked university departments during the academic year, and personally encourage the careers of young scientists selected annually for the prestigious ARCS Scholar Award.

Among the key facts and accomplishments noted in the report are:

“We’ve come a long way and accomplished much since our beginnings in 1958, but we can’t rest on our laurels,” said Andi Purple, ARCS Foundation’s National President. “In order to stay relevant to scientific innovation in America, we have to continue working together with our membership and academic partners to achieve the goals identified in our strategic plan.”

The report highlights annual and historical reach of funding amounts, university departments, and scholars served. Such data is accompanied by history and context, enabling those not yet familiar with the organization’s history to gain an overview of the diverse aspects of its scholar-focused activities and how its funding model has evolved.

Of particular note is ARCS Foundation’s third year of partnership with The Roche Foundation to create a national scholar award for promising doctoral students in the life sciences, which affirms the visible national role that ARCS Foundation engages with industry, academia, and government entities to ensure that young scientists may pursue new ideas across STEM fields. ARCS Foundation also engages its own Science and Engineering Advisory Council (SEAC,) comprised of leaders working at the forefront of STEM fields nationally.

Illustrating the result of its investments, the report includes profiles of ARCS Foundation Scholars working at the frontiers of their respective fields of discovery. The ARCS Alumni Hall of Fame highlights the impact of ARCS support by recognizing renowned scientists who have made remarkable contributions to science and who attribute their early success to the receipt of the ARCS award. All reaffirm the breadth of science fields that ARCS Foundation supports, and the interdisciplinary, collaborative opportunities ARCS Scholars have both regionally and nationally as a result of the award. 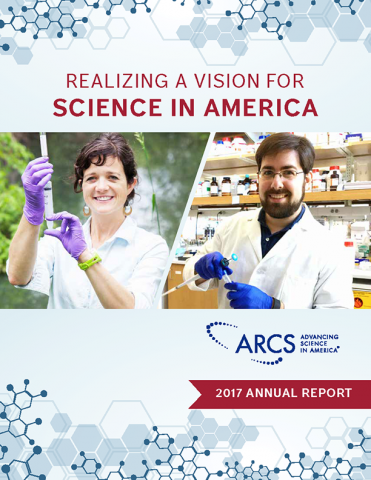