Among the key facts and accomplishments noted in the report are:

In 2018 the foundation is celebrating 60 years of supporting promising young U.S. scientists in the early stages of their research careers. ARCS Foundation Scholar Awards are nationally recognized for their impact in ensuring the strength of the STEM pipeline, which is fundamental to an innovative and growing U.S. economy. Because much of government funding focuses upon science in its developed stage, ARCS Foundation fulfills an essential role in ensuring that young scientists may confidently pursue the basic research that is vital to scientific discovery.

The regional, chapter-based model of philanthropic investment practiced by ARCS Foundation since the founding of its ARCS Los Angeles Chapter in 1958 has enabled significant local funding support. Members regularly interact with top-ranked university departments during the academic year, and personally encourage the careers of young scientists selected annually for the prestigious ARCS Scholar Award.

Of particular note is ARCS Foundation’s awarding of more than $110 million to more than 10,000 scholars since the formation of the foundation, and the fact that significant milestones were celebrated by the Los Angeles (60 years), Metropolitan Washington (50 years) and Seattle (40 years) chapters in 2018.

“It is exciting to reflect on how much ARCS has grown in the six decades since our humble beginnings in 1958,” said Andi Purple, ARCS Foundation’s National President. “This annual report underscores our never-ending mission we undertake nationally and at the chapter level in order to foster scientific innovation in America.”

The 24-page full color report highlights annual and historical reach of funding amounts, university departments, and scholars served. Such data is accompanied by history and context, enabling those not yet familiar with the organization’s history to gain an overview of the diverse aspects of its scholar-focused activities and how its funding model has evolved.

Illustrating the result of its investments, the report includes profiles of ARCS Foundation Scholars working at the frontiers of their respective fields of discovery. The ARCS Alumni Hall of Fame highlights the impact of ARCS support by recognizing renowned scientists, including 2018 inductee Dr. Neil deGrasse Tyson, who was a 1991 ARCS Scholar at Columbia University before becoming one of the world’s most famous scientists. All inductees reaffirm the breadth of science fields that ARCS Foundation supports, and the interdisciplinary, collaborative opportunities ARCS Scholars have both regionally and nationally as a result of the award. 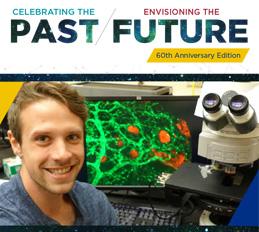