In December 2019, the influential and highly regarded Council on Competitiveness inaugurated a new initiative: Launch, The National Commission on Innovation & Competitiveness Frontiers. The Commission will define and support future innovation, productivity, and prosperity drivers for the nation, following the steps outlined in its 2020 roadmap.

ARCS Foundation, Inc. was invited to become a member of the exclusive Council on Competitiveness in 2015. As President of the ARCS National Foundation, I serve as the ARCS representative to the Council, alongside CEOs, university presidents, labor leaders, and national laboratory directors. In this role, I attended the National Competitiveness Forum in Washington DC this past December where the Commission described the erosion of the United States’ distinct innovation edge, calling it a challenge for the country. The case was made for launching the Commission and its 2020 roadmap.

Speakers from academia and every major sector of the economy shared their perspectives on how to confront and overcome the critical challenges facing the US innovation engine.  In addition to describing novel advancements in science and technology, they also touched on new schools of thought regarding enterprises and academia that reshape the ways that businesses operate, nations govern, and societies function.

It was clear after the two-day forum that all Council members support a renewed effort to define and support future innovation, productivity, and prosperity. The forum, along with the release of Launch, marked the Council’s introduction of a new, flagship initiative to confront and overcome critical challenges to US innovation capacity and capability.

In its first year, commission committees will examine the impact of developing and deploying disruptive technologies; explore the future of sustainable production; and optimize conditions for implementing a national innovation system. We plan to create momentum across the country to outpace the rest of the world’s innovation efforts and develop new partnerships to launch innovation-based research, businesses, and ventures in the United States.

I was honored to represent ARCS Foundation and serve along with these leaders in education and industry who are working to keep our nation scientifically competitive.

For clips presenting the speakers’ remarks, follow this link.

About the Council on Competitiveness

The Council is a non-partisan, non-profit organization whose goal is to increase the United States’ economic competitiveness in the global marketplace. To accomplish this goal, the Council sets an agenda to drive national long-term productivity and economic growth, bringing together Council members and government leaders to evaluate economic challenges and opportunities. The Council then makes recommendations on improvements that are presented to experts, government officials, media, policymakers, and the general public. 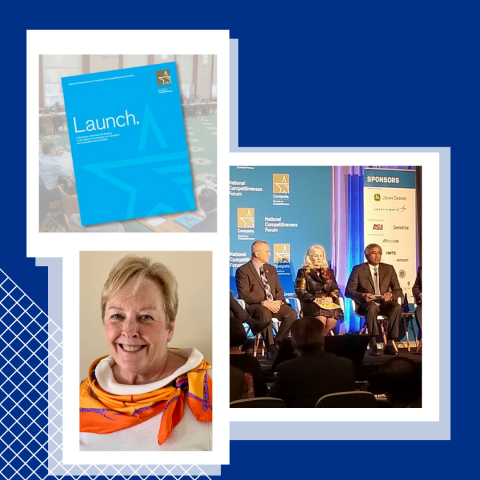