One in eight women in the United States is diagnosed with breast cancer. Of those, 10 to 20 percent will battle triple-negative breast cancer (TNBC)—that is, cancer that tests negative for estrogen receptors, progesterone receptors, and excess HER2 protein.

“TNBC is an aggressive form of breast cancer that can often metastasize in the body and recur after treatment,” Bassiouni notes. “The treatment options for TNBC are limited and often ineffective, and so we need to continue looking for vulnerabilities in the cancer we can target.”

“While this originally seemed like a challenge to overcome in these cancers, we have found it to be an opportunity for more effective and personalized treatment,” she says.

She noticed that this genetic perturbation, an alteration of the function of a biological system by external or internal means, is more common in a specific subtype of breast cancer that more aggressively affects African American and Hispanic women. “These findings may provide the basis for more effective and personalized treatment for women who are disproportionately affected by aggressive breast cancer.”

Bassiouni was first inspired to pursue STEM during her undergraduate years at the University of Central Florida where she studied molecular biology and microbiology. “It was then that I was first exposed to research, and I was amazed that scientists had decoded the complexities of our cells,” she says.

Currently, Bassiouni’s aim is to use advanced molecular and genetic techniques to perform research with clinical impact. She remarks, “I’ve found that tumors with a specific genetic characteristic don’t respond well to chemotherapy but do respond very strongly to alternative, targeted therapies.”

Throughout her career, Bassiouni has been supported not only by ARCS but also by the women in her field who work directly with her.

“I’m lucky to have had wonderful women as mentors and colleagues,” she remarks. “Their guidance and support have been invaluable in navigating an intimidating field of study and research.”

She encourages anyone with an interest in science to pursue studying it through whatever means. “Over time I learned that performing thoughtful, impactful research and believing in myself were the keys to success.” 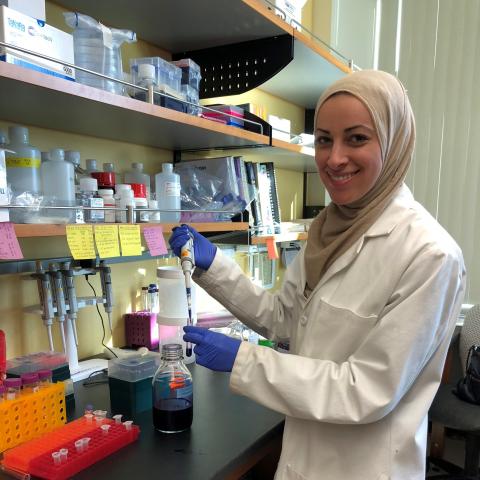