The Atlanta Chapter of ARCS Foundation is celebrating its 25th anniversary!  Founded in 1992 by a small group of women civic leaders who funded three scholars, the chapter has grown to over 150 members who awarded $370,000 to 50 scholars for the 2017-18 academic year, including four 25th Anniversary Scholars.

One highlight of the 25th celebration was a panel at the annual Scholar Awards Luncheon featuring Dr. Deborah Kilpatrick, one of chapter’s original scholars.  Her remarkable success in science and business affirmed the wisdom of investing in young talent.  A special anniversary electronic series, called E-Blasts, provides information about the chapter’s founders, scholars, and donors.  Among the most popular E-Blasts are features on 15 long-time chapter members—mothers, daughters, and daughters-in-law—who share their reflections about the ARCS experience between generations, with the hope of encouraging yet another generation to join ARCS.

Our partner schools — Emory University, Georgia Institute of Technology, Morehouse College, and the University of Georgia — are also joining the celebration, with each hosting an event to showcase the institution and its ARCS Scholars.  The major member celebration will be a Jubilee Party in April. “The 25th celebration is about inviting, informing, and involving members at every level. We are proud of our past and believe the future is limitless,” said Sara Jean Burke, Atlanta Chapter President. 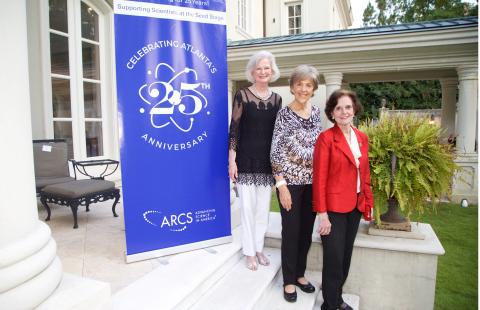