This white paper discusses the topics and points made during a panel discussion, Future innovations in Biomedical Science, at the ARCS Foundation 2018 All Members Conference: Scientific Innovation for the Next Generation in Washington, D.C. Held at the Willard Hotel, the panel featured thought leaders and experts in a discussion of the challenges and opportunities facing the biomedical industry in the United States and how ARCS Foundation is uniquely positioned to help STEM fields advance. Moderated by ARCS Metropolitan Washington Chapter member and founding medical director of the Wilmer Eye Institute –Bethesda Dr. Shameema Sikder, the group discussed how biomedical science is moving forward with exciting advancements and what it means for our society.  Dr. Sikder was joined by experts who have direct experience with this revolutionary work from perspectives in government, academia, and the industry.

Dr. Margaret McCarthy is a leading neuroscientist who has made significant discoveries related to gender differences and the brain. Her seminal research focuses on the influence of steroid hormones on the developing brain with a special emphasis on understanding the cellular mechanisms that establish sex differences. Dr. McCarthy is currently Chair of the Department of Pharmacology at the University of Maryland.  Initially trained as a biologist, Dr. McCarthy now works in the neuroscience realm, noting that the brain is the only organ in the body that is specifically designed to respond and react to the external world.  “People don’t realize how young neuroscience is,” said Dr. McCarthy. “It’s sort of the last frontier of medicine and new developments are happening quickly.” She noted that the brain doesn’t finish maturing until the age of 26 — and even as adults; people continue to make new connections. New studies argue that adults even continue to make new neurons throughout the human lifespan. “We’ve always been taught that the brain is immune-privileged (no communication between the peripheral immune system and the brain). We now know that there is an innate immune system in the brain but there is also tremendous communication between the periphery and the brain,” said Dr. McCarthy. She noted that in advancing this field, the subject of the study is also the greatest challenge: “In neuroscience, the challenge is the brain, and the issue is that it is encased in the skull which makes it hard to get to. . . so it’s difficult to treat in non-invasive ways.” Dr. McCarthy acknowledged that ethics are a constant concern in the field but that there is huge potential for helping society by staying vigilant.

Dr. Kathleen Ries Merikangas is Senior Investigator and Chief of the Genetic Epidemiology Research Branch in the Intramural Research Program at the National Institute of Mental Health (NIMH). The areas of Dr. Merikangas' research include: (1) familial mechanisms for comorbidity of mental and medical disorders; (2) identification of early signs and risk factors for psychiatric disorders among high and low risk populations; and (3) large scale population-based studies of mental disorders including high-risk designs and prospective longitudinal research. Dr. Merikangas originally studied clinical psychology before becoming involved in epidemiology to learn the causes of disease and eventually venturing into genetics. She also noted how the field of genetics is, comparatively, quite young when considering the work done in other scientific fields: “The Human Genome Project and mapping the human genome has been so fruitful that we have learned much in the last 10 years. . . In the last decade we’ve learned that genes are wired to respond to their environment, just like the brain.” Dr. Merikangas argued that scientists need to continue thinking across disciplines in order to find links between fields and continue making new discoveries. One of the challenges facing this field is how to recruit and train young people to look across the disciplines and think differently to address diseases. Much like the field of neuroscience, genetics is a discipline where information can easily be misused and ethics are an ongoing concern.

Dr. Jane Amara is a life science professional, and currently Associate Director of The Belfer Office for Dana-Farber Innovations at the Dana-Farber Cancer Institute. Dr. Amara previously worked in a Boston-based venture capital firm, overseeing investments in early-stage companies spun out of universities in the UK. Dr. Amara’s experience in biotech business development includes five years identifying, evaluating, and executing transactions at Biogen, as well as working on a regulated gene therapy technology for cancer and other applications. “I work on the commercialization side of the industry,” Dr. Amara said during the discussion, “I am so excited to be working in oncology, where right now the changes are making their way into the clinic, the market, into people’s offices, and people are benefiting from the basic research that has led to these breakthroughs.” Specifically in oncology and immuno-oncology, there is a large focus on discovering what about the expression of a patient’s cancer cells will affect how they are treated. Dr. Amara noted that the biomedical industry is facing some challenges in how to broaden company development across the country, “We have wonderful educational institutions where ARCS Foundation is supporting education, but we’re not tapping into the full depth of possibility [in business development].” Another issue is how to reward researchers and developers without completely bankrupting the system. Dr. Amara is excited about the advancements that are being made and hopes that students and researchers will continue to be encouraged to diversify their interests, “There is no 13-year-old out there who wants to grow up and do technology transfer at a cancer center. That is just not one of their aspirations, but when you’re young and interested in science you just don’t know the incredible breadth of opportunity there is.”

Kunal Parikh, Ph.D., is an inventor and entrepreneur working at the intersection of medical technology and social enterprise to address significant disease burdens globally. He currently serves as a research faculty member in the Center for Bioengineering Innovation & Design at Johns Hopkins University (JHU), where he leads a multi-disciplinary team developing and translating novel medical devices for unmet clinical needs. Dr. Parikh earned a Ph.D. in Biomedical Engineering from Johns Hopkins University where he was a Roche/ARCS Scholar, saying, “ARCS has been such a huge part of my own story and my own upbringing.” Dr. Parikh said that one of his core questions is “How do I create a world in which no one is limited by the circumstances of their birth and what is the best way for me to achieve and maximize my personal impact?” Speaking of the most recent discoveries, Dr. Parikh noted, “in the greatest biomedical innovations breakthroughs, they are all enabled when you bring two different fields together,” and much of the focus of his work is on bringing nanotechnology and medicine to technology. Using new technologies to target therapies and treatments can help address patient needs without using blunt instruments on the body. Dr. Parikh specifically focused on access during the panel, stating, “it’s not good enough to only make treatments accessible to 10-15% of the world’s population without having [the therapies] be accessible to everyone anywhere.” Dr. Parikh also noted that in the last 10-15 years his field has become much better at recruitment and training of researchers and that ARCS Foundation has played a large part in filling the STEM pipeline. He also challenged the audience to look beyond the current focus, “We are filling the pipeline but we need to figure out where researchers go and what they do after they become educated. [ARCS Foundation] is already doing this work, but there needs to be a greater emphasis on mentoring students to navigate what the next steps are for students and researchers.”

In addition to contributing a diverse perspective to the discussion, the panelists largely agreed on three common themes: the need for an emphasis on ethics, greater interdisciplinary encouragement, and more mentoring opportunities for young scientists navigating the first steps of their careers.

The panel was presented by ARCS Foundation, Inc., which works to sponsor talented, motivated American students at top U.S. universities and ensure that their careers help address the United States’ need for new scientists and engineers. 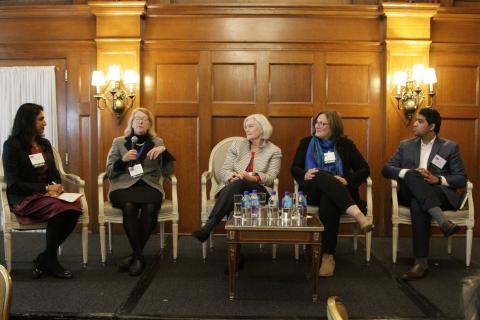