Inside the Glass: ARCS Scholar Explores the Science of Winemaking

“There’s just so much going on inside the glass. It’s like a microscopic universe, living, breathing, and constantly changing.” You might think ARCS Scholar Thi Nguyen is describing his experience mixing chemical compounds in a lab. He is, instead, detailing his appreciation for the chemistry behind a glass of wine in California.

Born and raised in California, Nguyen is a third-year PhD student in the Agricultural and Environmental Chemistry program at University of California, Davis (UC Davis). The department of Viticulture and Enology at UC Davis was established in 1935 following the end of US Prohibition. Since then, the department has made extensive strides in the field. Now in his third year of graduate studies, Nguyen has made strides of his own.

His research in the sciences of grape-growing and winemaking focuses on the chemistry of wine oxidation, or how a wine changes over time with oxygen exposure. Specifically, he studies how a wine’s chemical composition affects how fast or how much it can age. His experiments are conducted in laboratories and vineyards accessible to the department's students. Nguyen has also worked in wineries in Napa, California, and Mendoza, Argentina.

As a graduate student researcher at the UC Davis Dr. Andrew Waterhouse Lab in 2016, Nguyen published “Vitisins: Pyranoanthocyanins resulting from the addition of pyruvic acid or acetaldehyde to anthocyanins, contributing to wine color and color stability.” In this article, he explores how pyranoanthocyanins, chemical compounds formed by yeast during controlled oxygenation and fermentation processes, affect the pigments of red wine.

“Wine has always been shrouded in mystique and romance,” Nguyen says, “But I think a more objective understanding of what’s going on at the molecular level and the ability to predict wine aging using chemistry would be incredibly beneficial to both producers and consumers.”

Nguyen believes that his research “paves the way for future research into wine aging and oxidation,” which ultimately benefits the prominent and deeply rooted wine industry in California, as well as in the rest of the world.

According to Nguyen, fundamental, or basic, research is typically less likely to receive funding in contrast to the “action-oriented, results-driven” industry of applied research. Nguyen is thankful that ARCS Foundation helps scholars like him who are involved in basic research. “I'm able to dedicate my time fully to this research without having to worry about working or teaching to stay afloat,” Nguyen says. “I don't think it would be possible without support from ARCS.”

Learn how you can help students like Nguyen advance STEM through research here. 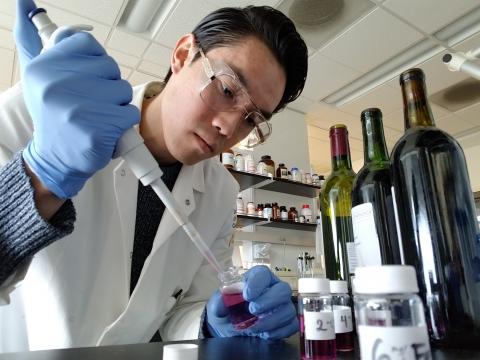