Andrew was worried. It was 2 a.m., and a storm had just cut electricity to the home he shared with his parents and brother, Henry, in Export, Pennsylvania.

Both young men are affected by spinal muscular atrophy (SMA), a progressive neuromuscular disease similar to Stephen Hawking’s. Electricity powers not only their wheelchairs but the ventilators keeping them alive. It also powers their computers, a portal to their work.

Using a computer mouse is one of only two actions Andrew can do by himself; the other is powering his wheelchair. “If I eat something,” he says, “someone else is holding the spoon and fork.”

Their father, David, is an engineer who, with his wife, Joan, had designed their house with wide hallways and doorways for their sons’ wheelchairs.

At the time of the power outage, both young men were studying toward a PhD at Carnegie Mellon University. An ARCS Scholar, Andrew was working under Professor Hyung Kim, experimenting with computer-simulated liquids in capacitors, which can store a charge as a battery does. Electric cars depend on similar batteries to store large amounts of energy. Andrew had already published two of his four PhD thesis chapters in respected scientific journals.

At the moment, though, the house had no electricity. Andrew’s father retrieved the small emergency generator he had bought and filled it with gasoline. But when he pulled the cord, similar to that on a lawnmower, the cord broke and slipped into the cavity. David could not reach the end to pull it, or even attach a rope to it.

Time passed. All four DeYoungs knew how much depended on electricity, aside from life itself. Twice a day, Andrew and his brother got breathing treatments. For bathing, toileting and every transfer, the chains of a hydraulic lift are attached to a sling, on which Andrew sits and is hoisted onto a special table; from there, he can be lifted again to a wheelchair. For transfers to a special van, they use a forklift inherited from Andrew’s grandfather with ALS.

As they contemplated a solution to the energy loss, David remembered the family’s specially outfitted van. He found a large, heavy-duty extension cord and managed to run it between the van and both of his sons’ ventilators. He turned the van’s ignition and breathed a sigh of relief. The van had enough gas to run for about six hours.

At 8 a.m., David DeYoung went to a nearby store and stood in line for another emergency generator. Waiting at home, Andrew thought of his parents, of their endless devotion and love. He thought of his academic work and the journey toward his doctorate. He prayed.

The local electricity came on shortly after Andrew’s father returned. By then, the gas gauge in the van actually read “Empty.”

On January 22, 2021, within a few weeks of his brother’s own PhD defense, Andrew DeYoung successfully defended his thesis, Molecular Dynamics Simulation Studies of Graphene Oxide Supercapacitors, completing his long journey to a PhD. Now he looks forward to a lifetime of doing the research he loves.

Andrew DeYoung was an ARCS Scholar from 2010 to 2012. ARCS members Linda Burke, Ann Fromm, and Maren Cooke attended Andrew’s virtual PhD defense, proud of what Andrew has accomplished, with his parents’ assistance, against unimaginable odds.

“So many people have helped me,” Andrew said. “Probably thousands. Volunteers, church members, students. I’d like to tell ARCS members, ‘You’re part of that too.’” 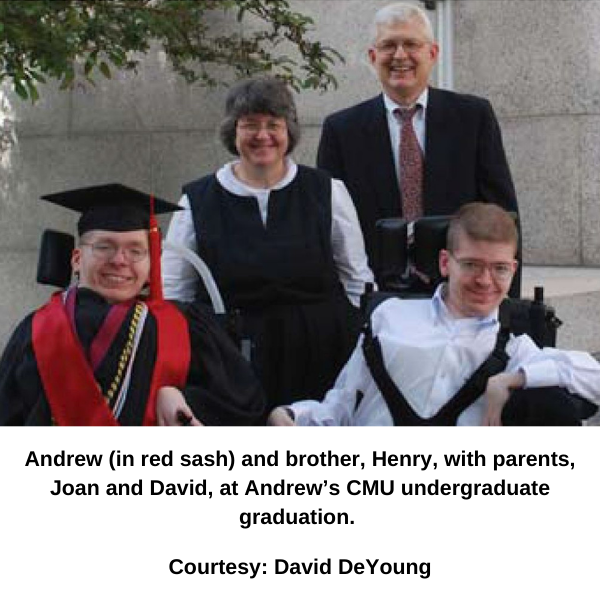 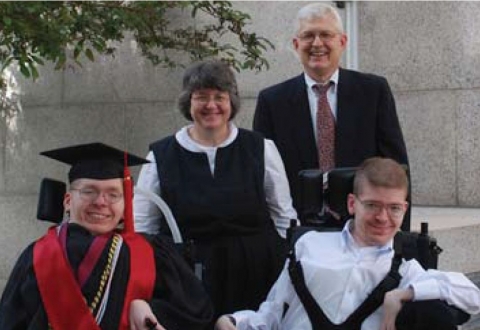