Many ARCS members spend time serving their chapters, providing support to scholars, or volunteering at a national level — but very few go to the lengths that longtime devoted member Sandra Matteucci has in serving the mission of ARCS Foundation. Since she first became involved with ARCS Foundation in 1991, Sandra has served as president of ARCS Phoenix Chapter and served on the National Board, as has her daughter Anna Maria. Over the years, Sandra has hosted many ARCS Scholars in her home, befriending and mentoring them, even after they have completed their studies. In 2004, Sandra established the Ralph Matteucci Endowment Scholar Award in memory of her late husband. “We support ARCS out of great passion for this organization and (the) benefits it provides our society through the development of some of the greatest minds in the country,” said Sandra.

The impact of Sandra’s passion and commitment to ARCS Foundation has continued through the years. In 2016, recognizing the importance of ARCS Foundation National’s role in sustaining current chapters and fostering new ones, she challenged her fellow members to donate on the national level. Her challenge raised much-needed funds and was instrumental in building the National Endowment fund into what it is today.

This year was a milestone year for Sandra, who was born on August 8, 1938, at 8:08 a.m., weighing 8 lbs. and 8 oz. As her 80th birthday approached this year, she decided it was time to celebrate in style. She gathered family and friends from across her many philanthropic ventures and had a celebration. Unknown to her, those who know her best decided to honor her unending passion and support for ARCS Foundation National and ARCS Foundation Phoenix with over $80,000 in donations in her name to celebrate this milestone birthday.

“It is truly unbelievable what people have done to honor what is important to me,” Sandra said. “To have donations made in honor of my birthday to both the Phoenix Chapter and the National Endowment is incredible and I feel grateful to all who have chosen to celebrate my birthday with me this way.”

To donate in honor of Sandra, or other ARCS members, volunteers, or scholars, please visit our donation page. In the message section, indicate the person you wish to honor with your gift. 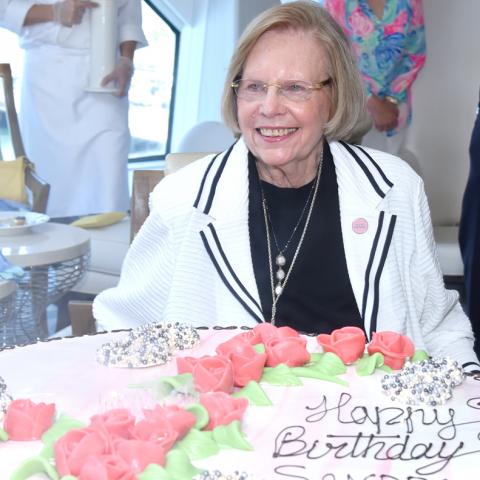