LaGrange, Georgia (December 23, 2021) – ARCS Foundation highlighted the successes of the organization in “Opening Doors to Scientific Achievements,” its Annual Report of the 2020-2021 academic year. In a year overshadowed by a global pandemic, the organization’s mission to empower innovation and scientific discoveries was bolstered by these ARCS milestones:

"We continually hear from our scholars that ARCS Foundation is more than a financial vehicle,” ARCS President Caron Ogg states. “In this annual report you will read that ARCS Scholars view us as a community that motivates them as they pave the way to new explorations and discoveries to meet the challenges we face in the scientific community.”

The report also shares ARCS Foundation National’s statement on opening doors to scientific achievement via diversity, equity, and inclusion (DEI), and the formation of a DEI Action Task Force.

The 2021 ARCS Alumni Hall of Fame inductee is F. Peter Schloerb, PhD, who has been recognized for leadership in the development of the Large Millimeter Telescope Alfonso Serrano, which played a significant role in capturing the first visual image of a black hole, confirming Einstein’s Theory of General Relativity.

Since founding the Los Angeles chapter in 1958, ARCS has practiced a regional, chapter-based model of philanthropic investment, which has enabled significant local funding support. Members from 15 chapters regularly interact with top-ranked university departments during the academic year and personally encourage the careers of young scientists selected annually for the prestigious ARCS Scholar Award.

The 22-page report presents data that highlight the annual reach of ARCS funding, as well as the university departments and scholars served. The data are accompanied by history and context, enabling those not yet familiar with the organization to gain an overview of the diverse aspects of its scholar-focused activities and the evolution of its funding model.

Illustrating the results of ARCS Foundation’s investments, the report features ARCS Scholars such as Trista McKenzie (Coastal Hydrology; University of Hawaii at Manoa), Jeremea Songo (Neuroscience; University of Oregon), William Mundo (Medicine and Public Health; University of Colorado), and Kevin Kaufman (Nanoengineering; University of San Diego), all working to advance the future of science in their respective fields of discovery.

To view the digital version of the 2021 Annual Report, follow this link.

About ARCS® Foundation: ARCS Foundation is a national nonprofit volunteer women’s organization that promotes US competitiveness by providing financial awards to academically outstanding US citizens studying to complete degrees in science, technology, engineering, mathematics (STEM), and health disciplines at 49 of the nation’s leading research universities. The organization has awarded more than $126 million to more than 11,181 scholars since 1958. ARCS Foundation Scholars have produced thousands of research publications and patents, secured billions in grant funding, started science-related companies, and played a significant role in teaching and mentoring young people in the STEM pipeline. More information is available at arcsfoundation.org. 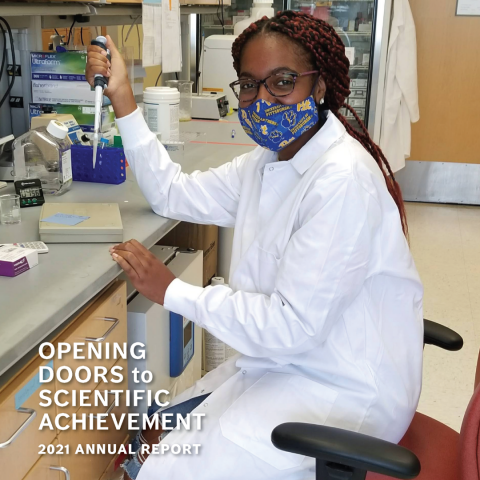