The internet of the future is here, opening a world of possibilities in communication, innovation, and technology.

On July 23, 2020, the US Department of Energy (DOE) unveiled a strategy at The University of Chicago to build a national quantum internet, known as the “unhackable” network. This initiative not only ushers in a new era of communications but also puts the US at the forefront of a global race for quantum technology.

“Quantum networking can create secure communications, which includes communications within security, banking, finance, and any private information filed or recorded on computer networks,” explains Panagiotis Spentzouris, head of the Quantum Science Program at the Fermi National Accelerator Laboratory near Chicago.

David Awschalom, physics and molecular engineering professor at The University of Chicago, notes that a quantum network could revolutionize science by using the technology to build sensors that more accurately measure early seismic activity, temperature fluctuations around the globe, and water purity. All this will be accomplished by manipulating the behavior of atoms and electrons, and the way they interact with one another on a tiny scale in the form of quantum bits, or qubits.

He adds, “Quantum engineers have learned how to control these actions in such a way that these properties act as a platform for new technology.”

Awschalom is also a senior scientist and quantum information science group leader at the Argonne National Laboratory outside Chicago. He directs the Chicago Quantum Exchange, alongside ARCS Scholar Alumna Kate Timmerman, who is executive director.

Timmerman’s role is to bring together academia, national labs, and industry to advance quantum information science and technologies.

“I foster partnerships with organizations across the region to build the quantum economic ecosystem in Chicago,” Timmerman explains. “My ultimate goal is to leverage the work being done at our region’s universities and national laboratories to develop the “Quantum Plains,” which will be the quantum version of Silicon Valley, here in Chicago.”

Since its inception in 2017, the Chicago Quantum Exchange has expanded its network, adding a dozen leading science and technology companies, as well as several universities and research laboratories, such as Argonne and Fermilab.

Awschalom says the Quantum Exchange helped Chicago compete and anchor two of DOE’s five National Quantum Information Science Research Centers. One of the national centers is run by Fermilab; another, called Q-NEXT, is led by Argonne.

“We want to develop the science and technology to control and distribute quantum information across distances ranging from microns to kilometers,” Awschalom explains.

While a coast-to-coast quantum internet network won’t be ready for at least a decade, some quantum communication experiments have been successful. In January 2020, Argonne and The University of Chicago completed a 52-mile quantum loop that winds circuitously between Argonne to the Illinois Tollway. Both organizations hope to expand the loop to 80 miles in the near future.

Researchers are using the quantum loop to explore underlying quantum engineering systems. They are also trying to harness the properties of quantum entanglement, which links two (or more) particles so whatever happens to one immediately affects the other, no matter how far apart they have traveled.

That “entanglement” will create an unhackable communications channel and enable people to send ultra-secure messages, financial transactions, and even vote over long distances. If the communication channel were disrupted, the information would immediately change and not be usable.

Timmerman, who remains actively involved with ARCS, is proud to lead the Quantum Exchange and honored to be at the forefront of an innovative, life-altering technological project that could help the United States become the first nation in the world to fully complete a quantum internet network. 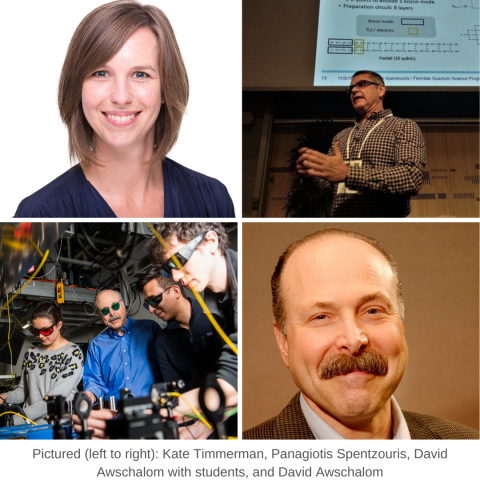