Devin Palmer’s path to the focus of his PhD research was step by step, as he discovered the science that holds the most intense interest to him – epilepsy research. About a third of individuals with epilepsy “have seizures that go untreated, thus there is still a need for novel treatment interventions,” Palmer explains.

“One method that is growing in popularity is Deep Brain Stimulation. For DBS to be successful, we have to first parse out which regions of the brain are most influential in seizure initiation and cessation,” he states. A PhD student in the Georgetown Interdisciplinary Program in Neuroscience, Palmer says, “My main interests are in seizure circuitries, and how manipulations of these specific regions – and cells within those regions – can limit seizure severity.”

“I seek to understand the “road map” by which seizures spread in the brain,” he explains. Working in the lab of Dr. Patrick Forcelli, Palmer uses high spatial and temporal resolution methods to record, target, and manipulate neuronal activity within defined regions of the brain to influence seizure initiation, propagation, and cessation.

Epilepsy is a neurological disorder in which brain activity becomes abnormal, causing seizures or periods of unusual behavior, sensations, and sometimes loss of awareness. Anyone can develop epilepsy. Epilepsy affects both males and females of all races, ethnic backgrounds, and ages. Seizure symptoms can vary widely.

Palmer says he first became interested in neuroscience research as an undergrad at Macalester College. This led to an award to work as a lab tech in the Neuroscience/Pharmacology branch at the US Army Medical Research Institute of Chemical Defense. “I was able to become proficient at an assortment of biological techniques and protocols,“ Palmer says. “During this time I developed an immense interest in seizure circuitries and utilized advanced techniques to discover initiation and suppression patterns within the brain.”

Palmer states his main hope for the next ten years “is for the research community to really hone in on that 33% of patients that have untreatable seizures, and ultimately find the best interventions to see that percentage drop dramatically.”

Palmer says he is grateful for the support as an ARCS scholar. “A lot of the techniques and technology used in the Forcelli lab are quite new and cutting edge,” he explains. “I am able to use methods I likely would not have had without the support of ARCS. To have ARCS support has been invaluable to the formulation and continuation of my research goals and hypotheses,” he says. “It is evident that ARCS understands how impactful science can be,” he says. 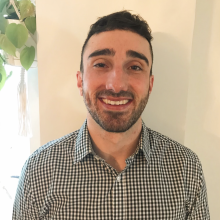