ARCS Scholar Alumni Dr. Lindsay Young and Dr. Eric VanderWerf first connected over similar areas of research. Now married, the two continue to foster their shared interest through the mission of the Pacific Rim Conservation (PRC), a research-based nonprofit organization that maintains and restores native bird populations and ecosystems in the Pacific region.

An ARCS Scholar Award in 2008 was the only unrestricted funding Dr. Young received as a graduate student, and she used it to attend a conference in South Africa that would otherwise have been beyond her financial reach. During the long flight from Hawaii, she and Dr. VanderWerf began talking about how environmental scientists could work in ways that complement governmental agencies. The result was PRC.

“We’re not an advocacy organization; we’re in the field getting it done,” Dr. Young says. PRC employs wildlife veterinarians, ecologists, and an avian-care specialist who all push the mission forward. Serving as PRC Executive Director, Dr. Young focuses on the population biology and conservation needs of seabirds, ecosystem restoration, and translocation of endangered bird species. Dr. VanderWerf, whose doctoral research included diseases and population biology of Hawaiian flycatcher birds, serves as Director of Science.

Why does PRC focus on birds? Hawaii is home to 33 percent of the endangered bird species in the United States but receives a scant 4 percent of federal funding. PRC helps fill in the gaps. Dr. Young says they partner with nearly everyone in the community to further their mission, from other conservation organizations to government agencies and the military. Last year alone, they translocated three petrel species and Newell’s shearwaters, removed rats from forest bird-nesting habitats, and replaced non-native weeds with native plants. They also worked with the Marines Corps to relocate part of the red-footed booby colony at the Marine’s Kaneohe Bay Range Training Facility to areas outside the firing range.

Human-made stressors and environmental hazards aren’t the only threats that PRC helps eliminate. Other major threats include pigs, cats, and dogs. “Anything in Hawaii that is furry is not supposed to be here, and they all eat birds,” Dr. Young notes.

Major tools in the recovery effort include fencing sanctuary areas to keep predators out, and attracting healthy wild adults or translocating healthy chicks to protected areas. In one project featured by National Geographic, black-footed albatross chicks were fledged in artificial burrows beneath A-frames at James Campbell Wildlife Refuge. “If we bring them in young enough, they’ll come back to that location and start new breeding colonies,” Dr. Young explains.

Dr. Young and Dr. VanderWerf continue to promote the mission of ARCS with the work and research of PRC, which has published more than 110 journal articles and technical reports.

To read about how other ARCS Scholar Alumni are advancing science in America, follow this link. 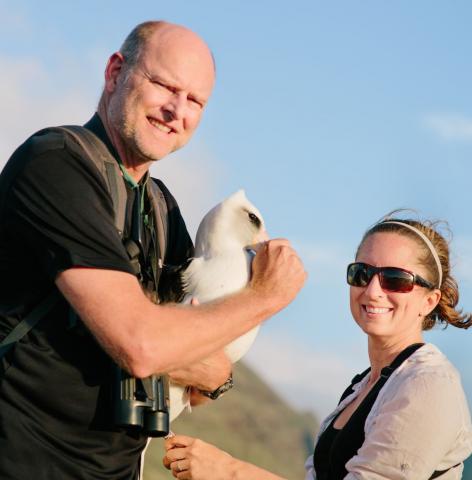