Scholar Featured on Cover of the 2017-18 Annual Report

Dan Miller’s first interest in neuroscience came in high school after he read a book about theories of consciousness by a prominent neuropsychologist.

“I was fascinated that there were so many different psychological, neural, and philosophical approaches for explaining how the brain works, and was particularly drawn to theories that involved the trillions of microscopic connections formed between billions of cells in the brain,” said Miller, an ARCS Scholar who is researching brain development and function at Oregon Health & Science University. “When I came to graduate school, I wanted to find a lab that studied the instructions used by neurons to form these complex connections during development.”

That quest led him to Dr. Kevin Wright’s lab at the Vollum Institute at OHSU, where he is using genetic tools to better understand how the exquisitely specific connections between brain cells (called synapses) form. Ultimately he would like to use insights gained from laboratory studies to improve our understanding of how specific symptoms arise in patients with rare genetic diseases that disrupt brain connections.

“The ARCS scholarship has enriched my time in graduate school in many ways,” he said. “As a transplant from the Midwest, the award helped me feel less stressed about the costs involved with moving across the country to Portland. The financial boost made it easier for me to focus on my research interests and adjusting to life as a graduate student. More importantly, the ARCS scholarship gave me my first exposure to the power of philanthropy and the long-lasting positive influence it can have on an individual and on society. My incredibly generous ARCS donors Larry and Caron Ogg have instilled in me a deep appreciation for philanthropy and that our contributions as scientists, no matter how small or incremental, have an impact on the world.” 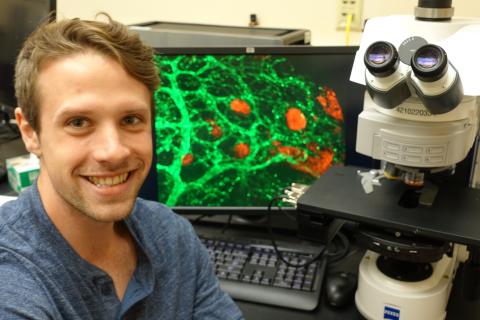